Alberta’s Dinosaur-Museum history goes back a long time (although not quite as far as its actual dinosaur history, which ended about 66 million years ago). But ever since Joseph Burr Tyrrell, a geologist with the Geological Survey of Canada, found a fossil of the Albertosaurus in 1884, the province has been a hot- spot for both paleontologists and globetrotting dino-lovers.

Today, tourists and locals alike follow a trail of museums across the province, travelling the same land as the “terrible lizards” did. The most famous of these is the Royal Tyrrell Museum of Paleontology, located near the town of Drumheller, 140 kilometres northeast of Calgary and close to where Tyrrell made his find. It has one of the world’s largest displays of dinosaurs and is a fitting tribute to Tyrell’s historic discovery.

But dinosaur remains have been found from one end of the province to the other, and continue to be found, with natural erosion regularly exposing new bones. So there are a number of spots beyond the Royal Tyrrell where visitors can gawk at giant bones (and do a lot more than gawk). 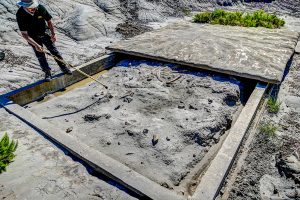 The Philip J. Currie Dinosaur Museum, just west of Grande Prairie, 450 kilome-tres northwest of Edmonton, sits on one of the biggest and most dense dinosaur bone-beds in the world. It’s packed with so many Pachyrhinosaurs bones that ordinary people can help recover them
(and other species) to this day.

The first bones were found in the 1970s by a high-school teacher from Grande Prairie, explains the museum’s executive director, Linden Roberts, and staff have kept the citizen-scientist spirit alive ever since the museum opened in 2015. “At other museums, you can see dinosaurs from around the world, but we are about the dinosaurs in the area,” Roberts says. “And we invite visitors to help us dig at those sites.” When they return to the museum, visitors will encounter paleontologists eager to study their specimens. “Some of the best finds are by citizen scientists — people who know a lot about paleontology, but also become part of the team that recovers the fossils,” she says. 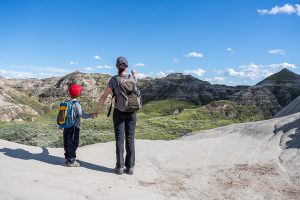 The Currie is well known for taking the experience to the great outdoors. “We are trying to create experiences that make it worth driving all the way up here,” says Roberts. “The gallery is augmented with tours of the lab and the outdoor experiences: bone bed tours, guided rafting tours of the Wapiti River and outdoor camps for the kids.”

The kids can camp indoors too, on overnight field trips that turn into their own Night at the Museum experience, sleeping among the remains of long-dead creatures, and a few that are still kicking. “We have some live animals too – a snake and a couple of lizards,” says Roberts.

Between the rafting, digging and other outdoor adventures, the museum hosts families and tour groups for multi-day visits, to the point that, Roberts says, some “museum people” even question whether the term fully sums up what the Currie museum does. “We’re developing a museum experience that will bring people from around Alberta and around the world and remind them that you can have fun while learning. It’s never going to be a big museum, but it’s always going to be a special museum.”

Far to the southeast, near the border with the United States, Wendy Sloboda discovered what she thought were dinosaur egg shells in 1987. Dr. Philip Currie (then with the Royal Tyrrell) confirmed the finding, and that the Hadrosaur eggs still contained embryonic material. At the time, it was just the second dinosaur nesting site found in the world. It was a landmark discovery in the paleontological field and marked the beginning of Sloboda’s career as a paleontologist. It also led to the opening of the Devil’s Coulee Dinosaur and Heritage Museum in Warner, Alberta, 280 kilometres southeast of Calgary.

Sloboda’s schoolmate, Tayna Meahan, remembers those days well. “I was in elementary when she was in high school, and I remember it being announced over the PA and it was really exciting for the whole school,” Meahan says. “There were reporters everywhere. And [Sloboda] told me that her family used to have to take different routes and ways to hide from reporters when it first happened.”

The exciting find didn’t inspire Meahan to become a dino digger — that didn’t happen until about 10 years ago, when she made a discovery of her own. “I was fishing when I found them,” she says. “We find marine fossils all the time down here, but these were bones. So I stopped at the museum and asked if they were dinosaur bones, or cattle bones, which is what everyone who was making fun of me was saying they were.”

They were authentic Ceratopsian and Hadrosaurus bones, and their discovery prompted Meahan to start volunteering at Devil’s Coulee. She soon became a fossil educator and now runs the museum as president of the board. She says her favourite dinosaur is “the next one that I find.”

There are plenty of fossils to find around Warner, and plenty of people coming from around the world to look for them. Because of the exposed geography and erosion-inducing cli-mate — and Alberta’s ancient history as a dinosaur hotspot — tourists don’t even need to dig to find the fossils and bones poking up out of the barren landscape. “There’s a reason they call it the Badlands,” Meahan says. “I could go out there one day, and there could be not that much showing, and then the next day, because of the wind and rain, there’ll be a bone exposed in the exact same spot.”

People come to take the full museum tour and then head out to the egg-nesting sites and surrounding areas for a unique hands-on museum experience. “People are surprised because we take them right into the coolies where everything is. Our museum is different because a lot of the stuff within our museum and out at the sites, you can pick it up, you can actually feel it — it’s not, ‘Look but don’t touch,’ like other museums.”

And with these museums presenting ancient history in a hands-on, accessible way that’s attracting tourists from around the world, it’s clear that Alberta is not like other places.