The unique landscape of southern Alberta has caught the world’s attention – in particular, wind energy developers. The wind blowing down the slopes of the Rocky Mountains remains constant and there are endless acres of land, presenting one of the best renewable energy opportunities in the world.

“Alberta is one of the greatest places in the world for wind,” says Jorge Aviles, a senior advisor with Calgary-based TransAlta Corp., which has 10 wind farms in the region and 21 in total. “Imagine being a European company coming from a place where there’s hardly any land, and you come to southern Alberta and the land never ends and on top of that you have this amazing wind all the time.”

It’s so compelling, that everyone’s getting into it. Small local developers and big global multinational corporations see the potential and are investing.

When the Alberta government held an auction for renewable energy projects in December 2017 under the province’s Renewable Electricity Program (REP), which is intended to encourage the development of large-scale renewable electricity generation, 12 proponents from around the world submitted bids for 26 projects. In the end, four wind projects totalling 600 MW of electricity generation were selected and all are expected to be in production by the end of 2019. The average bid price of $37/MWh set a new record-low for the price of renewable energy in Canada.

That’s good news for consumers and interest in the region from wind producers is not slowing down. The provincial government is in the midst of two more renewable energy project auctions and both are heavily subscribed.

While that growing interest and competition among wind farm builders has driven down the price that producers receive for their product, it shows the market is far from saturated and it’s an opportunity that’s been 25 years in the making.

Canada’s commercial wind energy industry was born in southern Alberta. In 1993, at a farm called Cowley Ridge just outside the town of Pincher Creek – a town of more than 3,500 people that sits at the base of the Rocky Mountains about 215 kilometres south of Calgary – 57 turbines were built in three stages. They were small and quaint by modern standards, standing 24.5 metres and built on lattice-metal legs, like mini Eiffel Towers. Cowley Ridge generated 16 MW of energy at its peak, not much more than the most powerful turbine currently in development, the 12 MW Haliade-X, will do all by itself.

Cowley Ridge’s turbines lived out their useful life and were decommissioned. The turbines were removed by their final owner, TransAlta, in 2016 after 23 years of service, but the industry has kept growing in the province. Alberta is now the third-largest wind energy market in Canada, with 901 turbines generating 1,483 MW, according to the Canadian Wind Energy Association.

Those numbers are set to climb considerably in the coming decade. First of all, turbines are getting less expensive and more efficient every year, making wind farms ever more economical to build and operate. The Alberta market also received a big boost from the provincial government’s Climate Leadership Plan, which, among other things, introduced a price on carbon dioxide emissions of $30 per tonne and promised to phase out Alberta’s 6,300 MW of coal-fired electricity generation by 2030. The goal is to replace two-thirds of that capacity with renewable energy, a move that would triple the amount of electricity the province gets from renewable sources from 9 percent to 30 percent.

Finally, Alberta is one of the only deregulated markets in North America, and that means it’s not controlled by large utilities. If a company can find an economical site and line up the required leases, financing and permits, it can build a project and sell the power into the wholesale market.

The strengths of the Alberta market can be seen in the response to the fully subscribed second and third rounds of the REP, which are expected to add another 700 MW of renewable energy to the provincial grid.

Alberta Wind Energy Corp. (AWE), a  Calgary-based developer of wind projects, has participated in all three REP rounds. AWE identifies potential wind farm sites, obtains leases, permissions and permits, and generally gets projects to the point of construction. Then the company brings in a larger partner to build and operate the sites.

Over the past decade, AWE has developed two projects that are now in production and is working on three more. One of those, the 250 MW Sharp Hills wind farm in southeastern Alberta, secured a 20-year contract in the first round of the REP and is expected to be in operation by the end of 2019. It is now majority-owned by the Spanish multinational EDP Renewables. AWE also sold one development directly to an end user – IKEA – which was looking to green its energy footprint.

“When we put the company together we were seeing power prices in the $80/MWh range,” says Marc Stachiw, president of AWE, which launched a decade ago, “and they dropped down below $20 between 2014 and 2016. Now they’ve rebounded to around $45/MWh.”

He says momentum is building because of low borrowing costs, 20-year power-purchase con- tracts that guarantee a revenue stream and low operating costs.

“Forecasts show power prices set to increase with the shutdown of the coal plants,” Stachiw says. “The economic argument that renewables are expensive doesn’t exist anymore.”

“If you can make the case that you’re buying power lower than the wholesale price over the next 20 years to lock in a low price for ratepayers, that’s a compelling argument no matter what political side you’re on,” he says.

The development of wind energy has brought a host of benefits to southern Alberta, including jobs, tax revenue and an income stream for many farmers who have been paid handsomely over the years for land leases. Then there have been spinoff benefits like the wind turbine technician program at Lethbridge College, which will help investors build the workforces they need to operate the farms.

That support and cooperation from local organizations is an important part of renewable energy development. Bev Thornton, executive director of the Alberta SouthWest Regional Alliance – a collaboration of 16 rural communities that covers 16,705 square kilometres — says southern Alberta’s economy depends on the mountain vistas that draw tourists.

The wind turbines and transmission lines that are essential to power the renewable energy alter the scenic landscape, she adds, “so there’s always a conversation about where to put those things.”
The cost of building transmission lines is also a consideration for many proposed projects. Southern Alberta already has a fairly good grid, but as Stachiw says, “there are only so many spots you can connect a large wind farm.”

Then there are other potential investors who could be waiting for the price of renewable electricity to start rising. TransAlta still owns the land lease at Cowley Ridge, and may yet repower the site, but Aviles says that for the time being the company is focusing on other investments.

But those obstacles seem minor when compared to the steady winds of energy transformation in Alberta. The future is bright for the energy market in the province’s south, and it will be powered by an ever-increasing percentage of renewable energy.

In January 2018, the first utility scale solar project in Western Canada began feeding renewable energy into Alberta’s electricity grid. The Brooks Solar project – in the prairie landscape of Newell County, about 200 kilometres east of Calgary – is a 17 MW solar farm with nearly 50,000 solar panels that can power up to 3,000 homes.

The provincial government hopes the $30-million project will be the first of many and in October 2018 put out a request for proposals (RFP) to procure about 55 per cent of the government’s annual electricity needs through solar power equivalents. Through this RFP, the government plans to purchase renewable energy certificates (RECs) equivalent to 135,000 MWh of solar-generated electricity each year for the next 20 years – enough electricity to power 18,750 homes annually – and anticipates having the solar project contracts in place in early 2019. 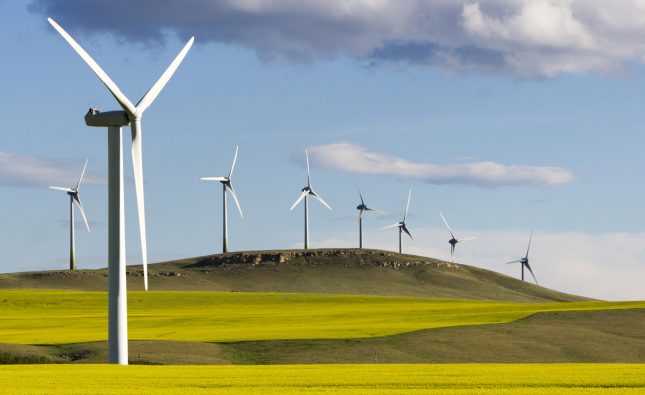