Over the last decade, southeastern Alberta has become a popular destination for mountain-bike enthusiasts. Medicine Hat, about 300 kilometres southeast of Calgary, boasts an estimated 155 kilometres of cycling trails, both in town and north of the city along the South Saskatchewan River. The trails offer a wealth of access to parks and other natural areas in and around the city of 63,000.

“The grade and quality of those trails in particular are competitive and they are a mountain-biking gem for anyone who is looking for trails outside of their general riding area or general riding season,” says Jace Anderson, executive director of Tourism Medicine Hat. “With our sunshine and climate, we have a lot fewer snow days and more riding days.”

Cycling in the area has seen grassroots support directly from the community. Anderson points to the work of groups such as the 670 Mountain Bike Club, which has been a catalyst for increasing the number of trails in the region and keeping them maintained. 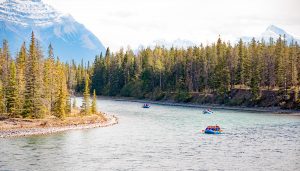 Just up the road, the community of Redcliff plays host to a skills park and a series of tracks and jumps for mountain bikers to test their mettle. About a half-hour drive southeast of Medicine Hat, Cypress Hills Interprovincial Park features more than 50 kilometres of paved and off-road tracks that can be enjoyed any time of year. Set among hills that rise as much as 600 metres above the surrounding plains, there is terrain for every skill level.

“I love hearing feedback from visitors when folks come out and experience it for the first time,” Anderson says. “Visitors are looking to come back and ride more of it.”

In the province’s west, a strictly non-winter sport draws tourists and locals alike out into nature. Rafting along the rivers that descend from the Rocky Mountains and head eastward across the province can prove to be either a thrilling adventure or a relaxing afternoon.

“It’s so much safer than what people think and so much fun,” says Gina Goldie, founder of Wild Blue Yonder. “It’s not the wild river people picture in their minds.”

Goldie started the company 24 years ago to share her love of rafting. While the common perception may be that rafting involves flying down white water rapids, the reality is that it’s safer than a lot of sports, Goldie says. Every participant is required to wear safety equipment such as helmets and life vests, while guides coach rafters through what might go wrong and how to react.

Working alongside everyone else in the raft makes rafting a great team-building experience for families or small groups. “You are functioning as a team on the boat, that’s your crew,” Goldie says.

And she points to the variety of rafting as one of the draws: faster rivers early in the season, when rivers are high, provide challenges and excitement; later in the year, the rivers slow down and visitors can enjoy a more relaxing version of the sport, gliding gently through the wilderness.

“Visitors are looking to come back and ride more of it.” — Jace Anderson, Executive Director, Tourism Medicine Hat