Alberta is a place of vast open spaces, a trait that has made it ideal for everything from backcountry camping to wind farms. It’s also a place of long nights, particularly in wintertime and at its more northern latitudes. The combination makes it one of the world’s great places for seeing the night sky.

To protect this asset, governments and communities have created Dark-Sky Preserves across the province. Dark-Sky Preserves are protected areas that make special commitments to protect and preserve the night, reducing or eliminating light pollution. Many insects, plants and wildlife forage, breed and navigate in the dark, so protecting dark skies helps protect ecosystems along with allowing for some amazing experiences.

The northeast corner of the province is home to the world’s largest Dark-Sky Preserve, the Wood Buffalo Dark-Sky Preserve. At 44,800 square kilometres, Wood Buffalo stretches across the 60th parallel and into the Northwest Territories. There, visitors can gaze upwards at a portrait of the universe they’ve never seen before. Photographers from across the globe come with the finest equipment to get truly memorable shots. 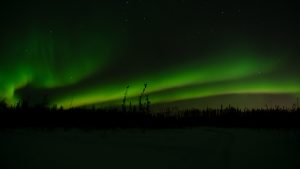 Not far to the south, outside the city of Fort McMurray, David Stirling offers tours into the wilderness to see the stars and the Northern Lights, those beautiful dancing waves of light that frequently brighten the night sky at northern latitudes. He takes people to his outpost between 10 p.m. and 2 a.m. There, they find an outfitters’ tent with a big wood stove, hot drinks and, outside the tent, a campfire. Step a few feet away and you’re in the pitch black. Reclining in chairs wrapped in blankets lets you sit back and stare at the sky. “I like to go out when it’s minus-10 or minus-15 [Celsius],” Stirling says. “But don’t worry. I provide winter gear good to minus-25!” He describes the Northern Lights as beautiful, brilliantly coloured curtains or shimmers of light that seem to dance across the dark sky. Known officially as the Aurora Borealis, they occur when energized particles from the sun slam into gases in the Earth’s upper atmosphere. A telescope allows people to get an up-close view of the skies. The next day, guests get to go dogsledding with a partner company. 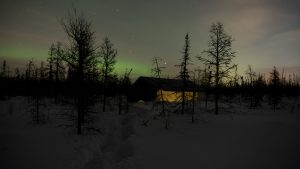 To protect this asset, governments and communities have created dark-sky preserves across the province

But perhaps the jewel in the crown is tucked into the furthest southwest corner of the province. There, Waterton Lakes National Park, together with Glacier National Park in the United States, has been recognized as the first transboundary International Dark-Sky Park by the International Dark-Sky Association. Officials went the extra mile of installing LED street-lights and dark-sky-friendly fixtures and bulbs throughout the park to earn the designation.

In the town of Waterton, four brothers have started a business called Dark Sky Guides, which offers tours and photography workshops yea round. “We are storytellers that deliver personable, memorable, interpretive tours that focus on showcasing the night sky, the moon and neighbouring planets,” says company president Keith Robinson. You’ll also see deep-sky objects like distant nebulae and star clusters, the Milky Way Galaxy, constellations, the Aurora Borealis and nocturnal creatures. “We encourage people to foster their own personal connection with both the night sky and Waterton Lakes National Park.” 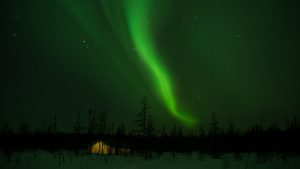